In this game, you are in command of pirate ships and your goal is to avoid running out of rum. If all the rum dries up on a given ship, your crew will go mad and you will lose the ship. Barrels of rum are placed randomly across the map. You must control the movements of your ship in order to collect the barrels of rum before your opponent does. 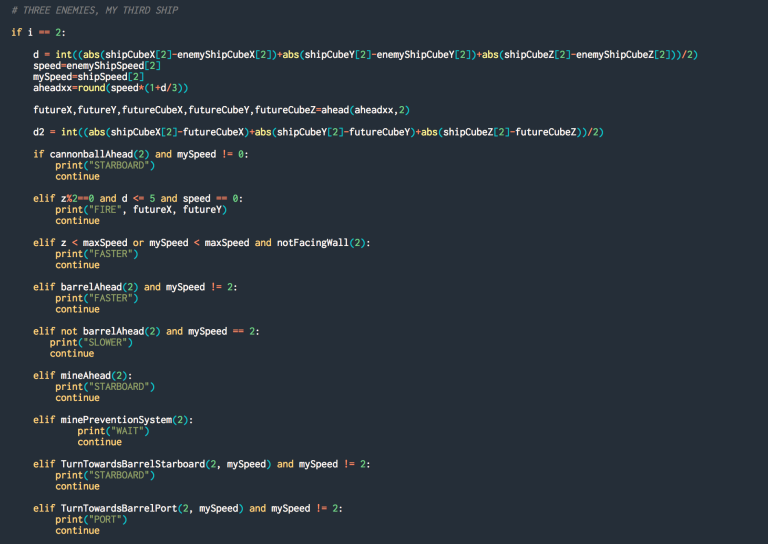 The game is played on a hexagonal grid 23 cells wide and 21 high.

Both players have one ship (and up to 3 in later leagues). Every ship is 3 cells long and 1 cell wide.

On the grid you will find barrels of rum (BARREL). The barrels contain between 10 and 20 units of rum. Each ship can carry a maximum of 100 units of rum (surplus will be lost).

Each turn, the players can decide to move their ship towards the cell of their choice using the MOVE command. Ships can gain speed, slow down, turn left (port) or right (starboard). The MOVE action uses a very simplified algorithm to reach the destination.

Ships can place mines on the grid with the MINE command. This action spawns a mine in the cell directly behind the ship. After placing a mine, a ship cannot place another for the next 4 turns.

If a mine is touched by a ship or hit by a cannon ball, it explodes. A ship touching a mine loses 25 units of rum. A ship in a cell adjacent to an exploding mine loses 10 units of rum. Players can only see mines if they are at a distance less than 5 cells away from the center of one of their ships.

Note: when using a command such as MINE, FIRE and WAIT, the ship will still be moving with the same direction and speed as last turn.

One game turn is computed as follows:

If at any point during its movement a ship shares a cell with a barrel of rum, the ship collects that rum. In the same way, if a ship touches a mine, that mine explodes and the loss of rum is applied immediately.

The grid:
The (0,0) coordinate is at the top left corner of the grid. The game’s grid is made up of hexagonal cells in which odd lines are slightly shifted compared to a normal grid. Since a hexagon has 6 sides, each cell had 6 neighbors (except cells on the edges of the map).

Collisions
If a ship attempts to leave the map, it is stopped and its speed is set to 0.
Collisions between ships are computed during the movement phase. If a moving ship’s front were to collide with another ship, its movement is cancelled and its speed is set to 0. Every time a movement is cancelled, collisions are checked again using the new positions.
For ships with a speed of 2, there are two stages in the movement phase. The first stage concerns all ships with speed ≥ 1, and the second concerns only ships with speed = 2). The collision check is performed at the end of each stage.
At the end of the ships’ rotation phase, collision are checked again. Ships whose rotation would bring about a collision will have their rotation cancelled and their speed set to 0. Collisions are rechecked each time a rotation is cancelled.

Manual steering of a ship:

Starting at Bronze league, you can control the actions of your ship manually with the following commands: FASTER, SLOWER, PORT, STARBOARD.

The FASTER and SLOWER commands will increase or decrease the speed of your ship by 1 unit. The value of the speed can vary from 0to 2.

The PORT and STARBOARD commands will change the rotation of your ship (on the next turn) by turning it respectively left or right. 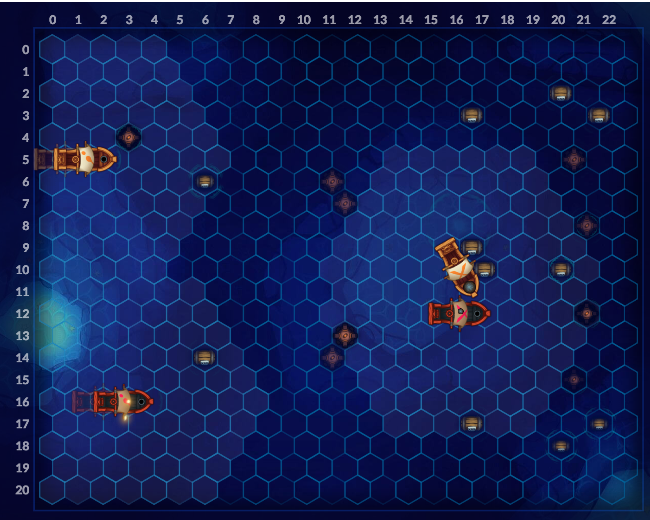 In the end, I made it to Silver League and for most of the contest I was in the top 20 in the United States.